If you would like to apply to Red Rose, here you will find all the information and guidance.
Locked
9 posts • Page 1 of 1

A hearty hello to anyone reading this application!
1. Character/Player Information
My real name is Mateusz. I am 24 years old Polish player,
I started playing Tibia when I was around 4 years old, who was then introduced to Tibia by my older cousins.
Current main character that I use is:
Antarctic Pupp (Level 84 DRUID) (born Nov 04 2016)(Even tho I am registered here as Antarctic Pup which is my knight!),
during my adventure I had many different characters and many different lives I lived -- but truth to be told I don't even remember half of them!
Previous guilds:
I was a member for a little while of House Redd, however that was a short period of time and not much came out of it. Guild was mostly casual/hunting/farming which I wasn't really into when it comes to Tibia (It's made out of great people however!) The reason I left was that I became semi-inactive and the guild was expending, while leaving inactive Tibians behind.
And for a little while I was a member of Green Dragon Inn as a Bartender (due to me spending a large amount of time there chatting), it was for few weeks, and mostly casual. I left due to disagreements I had with Mardin about state of Tibia which created disagreements between us.
A little more about myself :
I was born in the City is live in now, Olsztyn, Warmińsko-Mazurskie, Poland.
My parents owned (and to this day) own a gardening shop -- however I was never interested in that, I always preferred computers and technicalities.
I have 5 years older Brother, 2 years older sister. I was the youngest and wildest of us three. Always goofiest, silliest, stubborn and crazy.
I went to Technical School where I got my first professional diploma which is IT Technician, more or less a good start of IT career.
As I said previously, I was always into computer games mostly to being raised with cousins who were much older and already played those games. But also as youngest I always got the old computers that passed from my brother to sister and then to me. More often than not, something wasn't working, system was getting kinda outdated and specs weren't really able to pull themselves anymore. So the only options were to either tinker with it, or leave it be. So I decided I might as well try to make it run better. That's how my love and passion for IT and programming really started. Years passed and I gamed more, played more, knew more and more about computers. So I decided to tie my life into it, so here I am now, more or less playing games, making games from time to time, fixing computers and working on system solutions as free lancer.
Somewhere in the middle of it I learned a small branch of my passion for games, which was animations. It's what brought me to the drawing. While I never considered drawing to be something I really enjoy -- being able to bring my ideas, worlds I see in my mind created by my imagination pushed me forward, cause without drawing there was no animation. Movement, fluidity of lightning, showing worlds that only exist in someone idea pushed to the screen... That was always something that created awe in me!
I am a VERY VERY chatty person so there's a chance you already saw me few times in-game talking hours away at the Green Dragon Inn. I have 2 dogs and 1 cat (all of them are white <dog and cat tax at the bottom ;D>) I love animals and cold weather. Hate the heat! My hobbies are drawing, programming and 3D design (I'm awful at the last one but I love it!) and riding bike

2. Why do you want to join Red Rose
So here I am now, moving to bigger city to work jobs as IT, those changes are what inspired me to apply to Red Rose and actually give it time and try to join this community. It's for me time to challenge myself and go for the moon!
Very often I came back and then life pulled me back from the Tibia, but here I am once again -- ready to take it to next level.
I always loved the idea of communities and role-play. There's something about a simple game that gives you possibility to create your own story. Red Rose inspired many my adventures, friendships in-game and outside of game. So after few years around the idea, thinking about it, talking about, I've decided to do it... (story in 3rd section)


Today is the day.
'I know I am ready -- I know I am.'
I told myself. I just had to finally make a move. So I picked up my fancy wear and off I was.
I walked fast, head up, shoulders back, belly withdrawn,
'I AM READY'
I once again told myself -
'I CAN DO IT'.
I took sharp corner from Depot to the south, quick west... and yet something wasn't right. I stopped.
The plan was simple, walk In greet everyone and show my good side. Show them I belong there,
'I'll be great addition'
I shouted, someone passing by gave me a weird look, but I didn't mind.
I was ready, so I thought, and that weird feeling hit me again, something wasn't right.
I looked around and everything looked perfectly normal, nothing out of ordinary. Typical day on street of Thais, beautiful city.
Bit too crowded for my liking yet, and it hit me
'What if I'm not ready'
Echoed in my brain. I was waiting for such a long time to gather courage to do it, and here I was frozen in the middle of the street, torn in my own mind.
Moments ago I had all the power in the world to do it. Nothing could stop me, as if Banor himself filled me with strength.
Now it was all gone, I felt weak. What if they so no? What if they get angry at me for disturbing them?
'They aren't that kind of people...'
I knew some of them, others I've heard legends about, friendly, honest and good people, so why I was so afraid to do it?
For years I was set on decision that I'll apply someday I'll be part of this, I'll help, inspire and I'll become legend myself.
'A legend, me?'
I whispered, it wasn't what I wanted, I just wanted to be a part of something greater, aspire to be even better than before. Being legend never crossed my mind before, but now, here I felt like my own mind tried to trick me into something I didn't see before.
'Am I doing it for glory? For fame?'
I knew it wasn't right. I, I wanted to make a difference, but those thoughts. Something was stopping me once again. Like it always had.
I wasn't ready.
'If they see I am hesitant, they'll see through my mind and see those thoughts, all will be gone'
I turned around, slowly, shoulders front, belly out.
I was defeated by my own fear once again. On the road back I've decided to jump into Frodo's tavern for a drink as usual.
I always came to him, because not only did he have a beer to wash up my defeat away, he always cheered me up.
This time however it wasn't meant to be, I came inside, look at Frodo. By one look he already knew why I'm here. The tavern was busy as usual.
I walked up to the counter.
'One strongest mead please.'
He gave me a good look, from top to bottom
'No' -- he replied -- 'We're out of mead.'
I looked around and everyone was drinking, talking, having fun. I wanted to have fun too, why would Frodo my friend do this to me?
'Don't lie to me! I can see you have more, why won't you let me have one?'
Frodo frowned visibly, he wasn't having none of that attitude from me.
'You come here every week, you say you'll go there, talk to them, become something more.' -- he pushed his weight forward on counter, he continued
'And yet all you do is stay the same. You cannot grow if you don't break your fears, you cannot stand fast if you're afraid of getting boots dirty.'
I knew he was right. He knew he was right. Hell I think even the counter knew we knew.
'Fine I don't need your mead, I'll find OTHER tavern!'
Once again, he knew I wouldn't. He was my friend, he knew me too well. We argued about it before. So I left the tavern. The sun was slowly setting.
So with not much else to do, I decided I'll at least go to Fibula, I'll watch the sun go down in place I'll someday call home. I'm sure of it.
Some time letter I arrived, sun already set.
Another disappointment
The village was bright with torches, the Tavern was full of laughter and song. Yet, here I stood in the middle of Fibula looking at dream I had. I was so close, but in my mind I've might as well been in swamps of Venore. I sat down at the bench in front of Dermot house. The weather was warm, the night was dark and I felt tired. I closed me eyes. I took deep breath and I decided to head back. There was nothing for me here today. Night was long and dangerous and road wasn't shorter. I took few steps, Village lights were behind me and I kept walking. Darkness was getting deeper and deeper. Light behind was fading more and more with every step, but when I looked into the dark I realized this is not who I am. I whispered
Not what I am. I don't give up. I don't abandon my dreams.
I turned around, picked up my phase.
Head up, shoulders back, belly in. Deep sigh. Keep up tempo.
There I was, before my dream, one knock away from my dreams.
But before I could even knock...The door opened... And here I am.
Entering my dream. 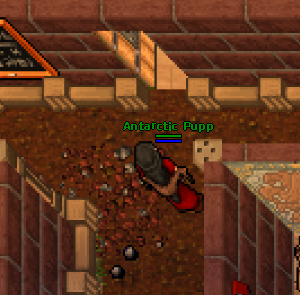 4. A Personal Touch
There's not much personal touch I can add more than what I wrote before this paragraph. I am a bit weird, sometimes crazy and most of the time I talk too much, but everything I do is Antarctic Pupp®!

Thank you for reading and looking forward to talk with you all!

I see that after Gryphis told you to repent from your sins a while ago you decided to apply.

I wish you the best of luck with your application. If you see me online feel free to chat.

-Dar
"In fearful day, in raging night,
With strong hearts full, our souls ignite.
When all seems lost in the War of Light,
Look to the stars, for hope burns bright!"

I wish you good luck with your application. You seem to have left some things out.
Yours sincerely,

Thank you for replies, I'll try to get in touch as soon as I catch someone online! And Avora Skyfallen, I just added previous guild I was in on those characters! I'll try to add more details as I realize what more I'm missing!
Top

Please review the proper format to submit an application and edit yours accordingly. Best wishes!

Thanks for your application feel free to catch me up for some chat.

I'm sorry to announce your application has been denied.
If you would like some more information please contact one of us council members.

Good luck in the future
Eldrivuz